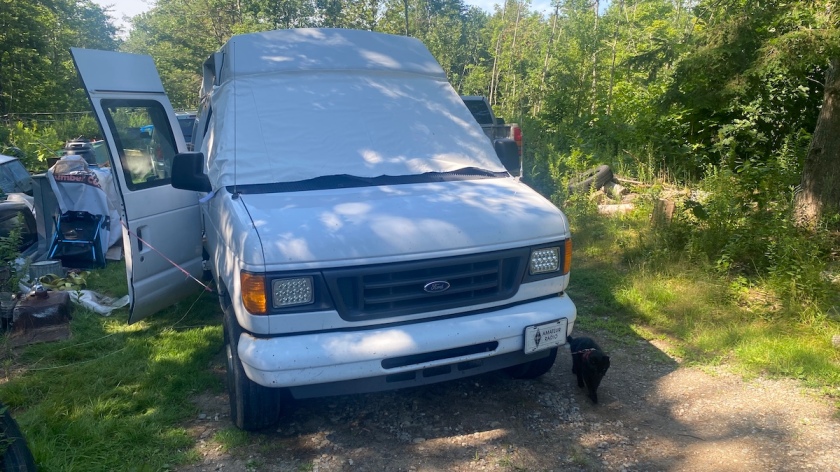 The rally was two solid days of go, go, go. It was fun, but it was time to slow down a bit. I slept in Sunday morning. I also gave Lister some quality outside time to make up for him not getting much during the past two days. I realized I hadn’t thought much about where to go next. My overall plan had focused around getting to NEFR at the end of July. Now that’s done, and we’re officially in the “bum around Maine for two weeks” part of the plan. But where?

It was then that I realized I was out of practice with winging it. Ever since Trisha left, I’ve had pretty specific destinations and places to stay, all the way to the rally. Now I didn’t, and I was suffering from a bit of decision paralysis. I had so many choices open to me, I was having trouble making any.

Unlike points farther south, not every campsite in Maine is already booked through the end of time. I was able to find a spot or two where I could camp during the week. The issue, however, is cell signal. I need to work. There’s little point in paying for a campground if I have to leave all day to find signal, and these state parks don’t have WiFi. I looked up some private campgrounds, but what little availability they have is quite expensive. For $70 a night, I could find a motel room. I guess that’s the problem with Maine in the summer. It’s a beautiful place, but everybody wants to be here.

In the end, I resorted to looking up friends again, and came up with a plan. Since it was only an hour away from Sunday River, I first drove to Height of Land, which overlooks the Rangeley Lakes. Aside from rally work at South Arm, this is the first time I’ve taken this van somewhere I’d also taken my previous ride, the Black Pearl. That was how I dipped my toes in the water of van life with a no-build van build. I’d parked here overnight — my first taste of side-of-the-road boondocking. It could hardly have happened in a more scenic location. This experience was a big part of what convinced me that van life was for me.

I didn’t stay overnight this time, though. Instead, I drove a couple of hours east to the sleepy little town of Washington, Maine, to spend a couple of days at Light Hill Farm. I met Sarah and Chris through the SCA, but our friendship has stretched to many areas outside of medieval re-enactment, from motorcycles to off-grid living. They’ve been rebuilding a 200-year-old farm — not just the farming itself, but also the farmhouse, which was literally falling in on itself when they bought the place. They can’t offer me shore power or running water, because they don’t have any. They run off a generator and batteries. They haul water to the house from one of two wells by hand. Their way of life is far more sustainable than mine. While they can live off the land, a disturbance in the petroleum infrastructure will ground me, both for travel as well as cooking and heat. They’ll also be picking my brain about their future solar power setup.

This is about as different as I can get from race cars. As much as I enjoy such excitement, the change is a good thing. I’m actually ready to go off on my own and do my own thing at this point, for the first time since Trisha left. But it’s still easier to visit friends who already want to see me anyway, so I might as well while I’m in Maine. Once I hit the road west after Climb to the Clouds, friends will be fewer and farther between than they are now. In New England, I pretty much can’t throw a rock without hitting one of them. For now, I should continue to enjoy the company and hospitality of my friends. They will be fewer and farther between when I go west.

However, I did manage to find a campground in Fryeburg, Maine that actually had availability next week. I don’t do paid campgrounds a lot, but $15 a night is surprisingly affordable these days, so I booked a site for a few days next week before Climb to the Clouds. I need to get back into the swing of camping rather than driveway hopping from one friend to the next, so this should be a good way to ease back into it. I also know I’ll have a good cell signal in Fryeburg, since it’s a popular place (the Fryeburg Fair is a big deal in this area), and I just drove through there and verified it myself. It may not be quite as scenic as somewhere like Moosehead Lake, but it fits my current needs, and the price is right.