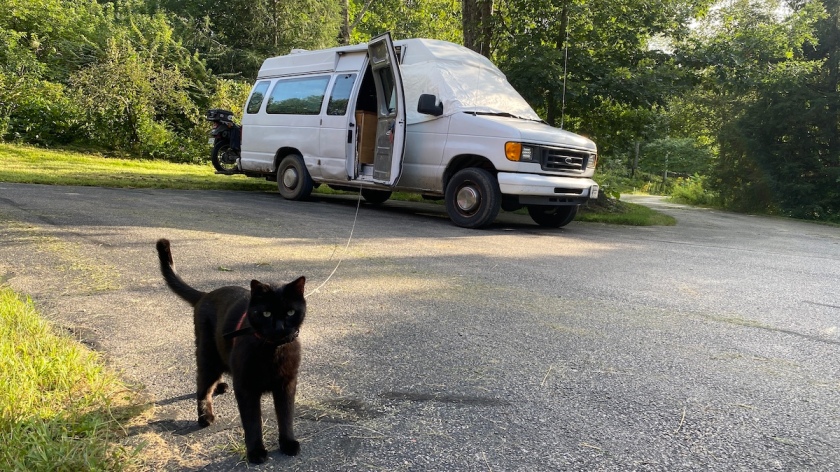 The night after race day at Climb to the Clouds, I felt a very strong vibe of “get outta here.” I realized I didn’t know for sure if the free camping extended to Monday morning like I’d planned, and everyone else was leaving. This could be because they had work the next day. So did I, but I can work from anywhere with an internet connection. Still, I followed my gut, loaded up the bike, and found somewhere else to be for the night.

I ended up on the side of a dirt road in the White Mountain National Forest. Throughout most of the forest, you’re required to camp at least a quarter mile away from the road, which makes it difficult for people like me. However, this particular road was an explicit exception to that rule. There are four campsites, all of which were full, but there are also numerous pulloffs to the side of the road. I don’t need to set up a tent, so I just pulled over and called it a night. Bonus, I had cell signal, so I caught up on some videos that night.

At this point I’m working my way slowly south toward the northeast corner of Connecticut. Much to my surprise, I got into a non-sportbike track day on the 24th, plus my tire swap got delayed. This means I can ride the track on my current worn, but safe, pavement-oriented tires, then get fresh big-block knobbies installed immediately afterward. As much as I hate believing in fate, I can’t deny that an uncanny number of factors told me that I will go HERE, NOW. So I’m rolling with it. My on-road/off-road adventure tractor has not only tackled the Tail of the Dragon, it’ll become a track bike, too.

With this in mind, I made plans for the rest of the week while parked on the side of that dirt road in the White Mountains. I booked my first Boondockers Welcome stay with Martha and Randy in Canterbury, New Hampshire for the following night, then back to Allyson’s driveway for the rest of the week. The stay in Canterbury went well. It was nothing special, just a piece of driveway for a quick overnight. I had to leave by 8:00 am the next morning, because they needed to clear their driveway for an arborist to take some trees down. That was no problem at all, because I needed to work.

They didn’t offer WiFi, which is fine, and their cell service at the house was poor. As it turns out, though, I was able to get into their “xfinitywifi” network. That’s “free” WiFi available to all Xfinity broadband customers. Every Xfinity modem/router has it, and all you need is a login to use it. I’m not an Xfinity customer anymore, but I’ve been given a login to use anyway. It turned out to be the fastest internet I’ve had anywhere in my travels. That’s a useful tool if you can get it from someone you know.

From there, it was back to Allyson’s for the third time in my travels. I’d worry about imposing, but she was very clear that she wanted to see me again before I left the area, plus it’s still a strategic location to get a lot of things done. I replaced my van’s blower motor, which naturally died at the very beginning of Climb to the Clouds. This meant I had no air conditioning or heat, both of which I would’ve enjoyed at times depending on my altitude. All better now. I gave my refrigerator/freezer a deep cleaning, the first since we hit the road. Trisha did the cooking and grocery shopping, so there were items she’d forgotten about and I never knew about at the bottom — some of which just needed to go away. All better now, and I have much more room for the food I want to have (and am capable of preparing with vastly inferior cooking skills to hers). I have a few other tasks to accomplish while I’m here, too, like cleaning and lubing my motorcycle chain, changing the van’s oil before I head west, and meeting a friend at my storage unit to hand off some unneeded items to her.

I hate orbiting. It frustrated me when we were in a holding pattern in Florida for Trisha’s job that fell through, and it’s frustrating me now. I’m anxious to begin my adventures and exploration. It’s for good reasons, but I still don’t enjoy planning my travel to be in a certain place at a certain time. I honestly find it easier to… Not so much make it up as I go, since I like to plan at least a little. But I don’t like having commitments dictate my travel plans. Right now I’m orbiting southern New England to come in for a landing on Monday evening, so everything revolves around that. I have a Harvest Host booked for Friday night, and haven’t heard from another about Saturday, so I should poke them. Then figure out Saturday and Sunday nights.

Even as I begin to head west, I’ll be orbiting a little bit. As I start heading west, I’ll be visiting the IMS Outdoors motorcycle show in Carlisle, PA in mid-September. I made press contacts there when I was writing for RideApart, and they invited me to check it out even though I don’t write for them anymore. That works great for me, both for my personal interest, as well as putting some coverage on my new website, Piston Slap. I’ve done a kind of soft launch over the past week, telling friends while I get the ball rolling and get into a routine of posting daily articles there. If you’re interested in my unique take on general automotive and motorcycle news, go check it out.

Anyway. I still have people to see and places to go after IMS Outdoors, which will dictate my general route west for at least a little while. But because those aren’t events, taking place on specific dates, I can be a little more flexible about when I get there. I’m looking forward to that part of the journey beginning. I also hope that the farther I get out of my currently known territory, the more of an adventure it will be — and the more it’ll snap me out of my continuing funk about the split with Trisha.

Starting the day off right in true #pnw style.