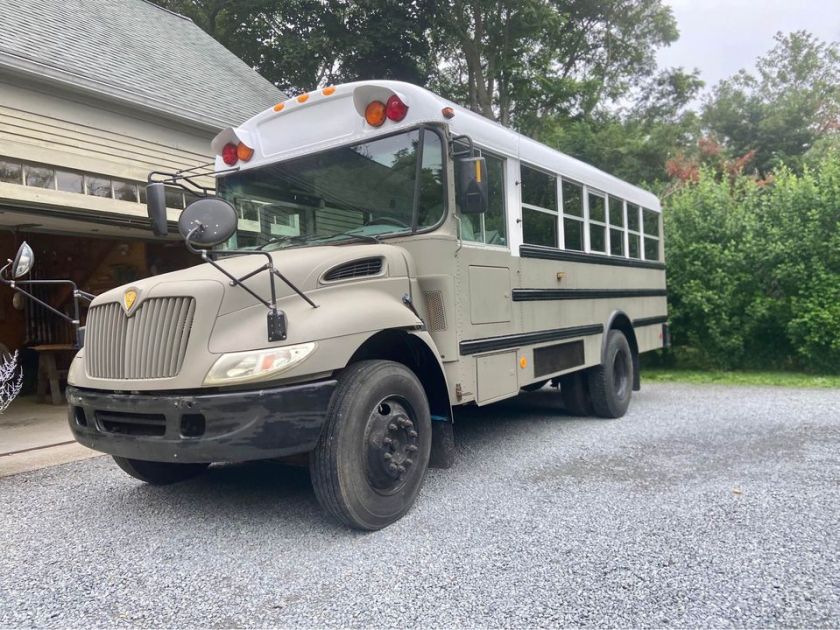 An article on Jalopnik caught my eye this morning. It features a Facebook Marketplace ad for a professionally converted school bus, which is nicer on the inside than some sticks-and-bricks homes. It also asks the question, is it really worth it? After all, it doesn’t include a shower, black water tanks, or batteries.

I’m not here to bash the article, or the author. I actually know Mercedes Streeter. She’s one of us. She has a bus or two of her own, though she doesn’t live in them at this time. In fact, it’s to her credit that #vanlife, #skoolielife, etc. has gotten some decent exposure on Jalopnik. She gets it.

“That’s a steep price to pay for a shorty school bus,” writes Streeter, “But it has a low 98,108 miles on the odometer and the quality of work looks great. Then again, $33,500 can get you an RV with a shower, batteries and black tanks.”

Of course, an old school bus, in itself, is not worth $33,500, even with this one’s relatively low miles and great condition. But that’s not what you’re paying for. You’re paying for what’s inside. And what’s inside this bus is amazing. Streeter agrees.

I think that’s true of most vehicles that have been converted into living spaces. My 2004 Ford E250 cost me $1,850, but I’ve probably invested almost that much into the house electrical system alone, never mind the rest of the build. I lost track of the budget during the mad dash to finish the build, but I’d estimate I have somewhere between $5,000 and $7,000 invested in my van, total. The vehicle itself is roughly 1/3 of that. The formula works for both my van and this skoolie.

Given that the bus, alone, is worth $11,000, is the build itself worth $22,000? Absolutely! This is a nicer living space than many houses, and it’s extremely well made by experienced builders. You won’t be roughing it in this build, aside from the lack of facilities that Streeter mentions.

So what about those missing items? Well, many of us do without a shower in our vehicles. It takes up a great deal of space, and uses a great deal of water, all for something you only use for a few minutes a day. You have to make some choices when you live in a vehicle, even something as large as a school bus. Even here, a shower just didn’t make sense. As I’ve found, it’s not hard to get a shower on the road. Many of us have gym memberships mainly for the use of their showers, rather than for working out. Truck stops are an option. If you’re willing to rough it a bit more, you can just wipe yourself down and stretch out the time in between your real showers a bit longer. If you’re out in the middle of nowhere, a portable outdoor shower is an option as well.

Black tanks are where your waste goes. This bus has a cassette toilet, which is easy to install and stash away because there’s no plumbing involved. I have a Nature’s Head composting toilet, which provides the same functionality without the cleanup of a cassette. As a guy it’s easy for me to simply water a tree, but that’s not always possible, particularly for women. Trisha had insisted on having this in the van, but now that it’s just me, I find myself using it mainly as a glorified pee bottle. I can often find somewhere else to make #2. If I can’t, though, it’s really nice to have the option.

The lack of house batteries would be my biggest issue with this build. This is also a somewhat easy problem to fix. It would’ve been easier if it was built with big batteries and solar panels on the roof before the beautiful interior was installed, since it now has to be modified for wires to pass through. On the other hand, I prefer my wiring to not be buried behind interior panels. Things break, especially when your house suffers an earthquake every day, so I like my wiring to be accessible. It would’ve been better to include it in the overall plan, though, as I did. Still, it’s not a showstopper, either.

To her last point, that you could buy an RV with all of these amenities for the same price, that’s true. The biggest problem with RVs, though, is they aren’t built to last. They look great on the inside and outside, but they’re built cheaply to extract the maximum profit out of their sale. Besides, people who buy new RVs can afford to replace them every 5-10 years, or when things start to break rather than fixing them.

School buses, on the other hand, are probably the most durable vehicles on the road. They’re designed specifically to protect our most precious cargo: our children. You won’t have to worry about major structural components flying off it like the ones that actually struck a friend’s windshield the other day, when an RV being towed decided to spontaneously deconstruct itself right in front of her. That’s how cheap RVs are built these days.

They do have all the modern amenities. They’re not so good at boondocking, but you can hook them up at an RV park and live in them like you would live in a house. If that’s what you want, go buy one. Those of us who lean more toward boondocking and self-sufficiency, though, tend to prefer a more durable vehicle. By not having all those hookups, we reduce complexity, which means there are fewer things to break. It also means we have what we need to live no matter where we park.

It doesn’t mean we have to rough it. I have plenty of power to run my laptop and other gadgets all the time. I need them for work, as well as for fun. I indulge in the luxury of having a freezer as well as a refrigerator, not so much to expand my cooking options, but because I like ice cream. That’s it. Blame Vancity Vanlife for that influence.

So, to answer the original question: Yes. I do believe the featured skoolie is worth $33,500 — to the right person. That person won’t be me, because I don’t have that much to spend. If I did, I still might pass due to the lack of a robust electrical system. But that’s just me. I’m sure many people would look at this as their dream home on wheels, and in many ways it is. I’d do mine just a little bit differently, but not much.

We’re in the old west now.