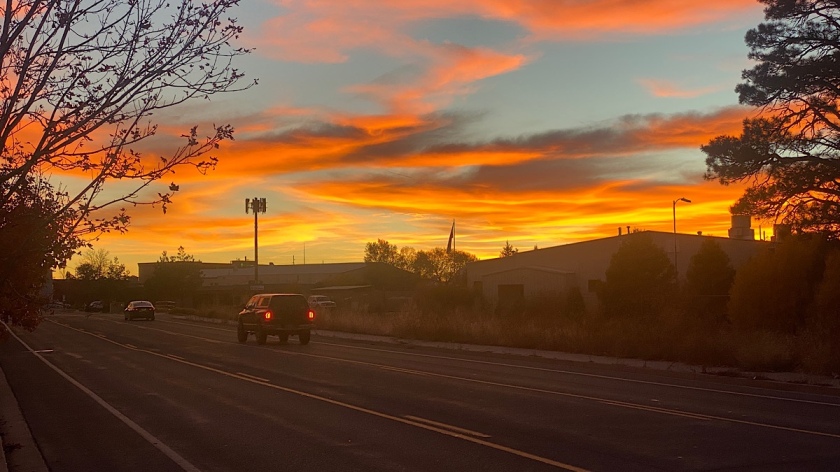 So much to tell, so I’ll just dive right in. Thanks to all the crazy time changes (and loud trucks running all night) we were up and at ‘em early. Our first top was a quick backtrack to the Wigwam Motel in Holbrook.

It’s another kitschy Route 66 thing, but this one is unique in that it’s actually still open. Amazing! Plus there are great classic cars scattered all over the parking lot as though they’re customers. You can really get a good sense of what this place looked like back in the day.

I particularly liked this VW Beetle camper, the Super Bugger. I’ve read about them before but never seen one in person.

Speaking of cool VWs, we spotted these two at a Volkswagen shop we drove by. We had to turn around and check them out.

While passing through Winslow, Arizona, we had to go stand on the corner.

I thought about taking up the guitar, but it wouldn’t fit in the van.

Next we went to check out a huge hole in the ground, better known as Meteor Crater. I’ve seen pictures of this place my whole life, and being an enormous space nerd, it was incredible to see it in person.

As with so many other places lately, pictures do not do this place justice. The other side is nearly a mile away. My camera is at its maximum wide angle setting, and I still can’t get the entire crater in the shot.

Tom and I took the guided tour along the crater rim, while Birgit took care of the critters. (Thanks!) As a space nerd I knew a bit about this place going in, but I learned a whole lot more. It took a scientist who had been working at nuclear test sites to come in, study the geology, and confirm that this crater was created in the same violent manner, except by a meteorite instead of a bomb. Previously it was thought to be a volcanic crater. Properly identifying this one led to the identification of every other known meteor crater on the planet. This one taught them what to look for.

Every astronaut who has ever walked on the moon has practiced here first. It’s the best preserved crater on Earth, and most like the lunar surface. Buzz Aldrin had an accident during training where he fell and tore his spacesuit open on the rocks. This was the best time for such an accident to happen, because Earth has an atmosphere while the moon doesn’t, so Aldrin wasn’t hurt. This led to a complete redesign of the Apollo spacesuit to be tougher and able to withstand falls better. The Artemis astronauts will be training here as well.

We also got to see what’s left of Daniel M. Barringer’s original homestead on this land, which he acquired through the Homestead Act. Meteor Crater has been privately owned ever since. He was positive this was an impact crater back in the early 1900s, but it wasn’t until 1963 that this was scientifically confirmed.

After exploring a big hole in the ground, we went to another modern ruin, Two Guns. This was originally a trading post that later became a tourist attraction, which ended with a murder and a series of other unfortunate events before it was abandoned. It’s a crazy story and well worth a read. I did not visit the Apache Death Cave, where 42 Apache were said to be killed in battle.

There was also this neat abandoned gas station, which has been completely consumed by graffiti.

Nearby is the Twin Arrows ruins. It’s a good thing these enormous arrows missed me. This was the site of yet another trading post back in the day. Like so any other sites, I-40 directed traffic away, and the trading post shut down. Today, motorists may now visit the Twin Arrows Casino, conveniently located right off the Interstate,

Today’s big surprise was Walnut Canyon National Monument. We saw the sign as we exited I-40 where Route 66 finally resumed near Flagstaff, and took a detour. Between two sites on two consecutive days, my national park pass has already halfway paid for itself. This was a popular temporary home for many Native tribes passing through. There’s a lot more to tell, but this is already getting long. I might have to write a book about it all.

At our overnight stop in Flagstaff, I saw this sign on a van I parked near. I had a spare FIXD scanner, so I knocked on the door, met Sarah, gave it to her, and showed her how to use it. There were no engine codes to pull, but at least it has a clean bill of health. We hung out chatting for much of the night.

This has been the best day I’ve had in a very long time. Not just a Route 66 day, not even a van life day — I mean the best day, overall, that I’ve had since moving into my van. It was just one fun filled hit after another. I’m tired, but happy, and feel the need to brain dump all this in a post not written as well as usual because I need to record all this before I forget, and lose this feeling. Days like today are why I wanted to get into this life in the first place. Today had it all.