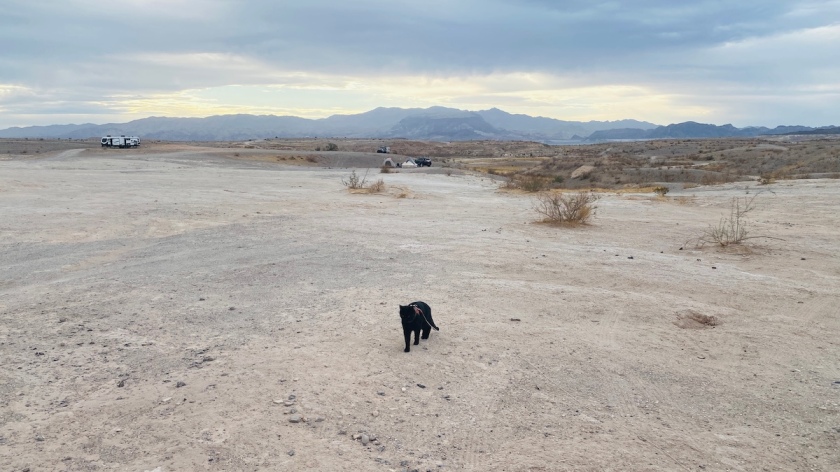 For the first time since October, I have officially chalked up a new state for my van. Yes, back in January I traveled to Nevada to bring Bob Wells’ van to Quartzsite. While that was my first time driving in Nevada, we drove there in a Homes On Wheels Alliance car, so my van didn’t cross into Nevada until today.

Melinda and I both planned to move on from Oatman, having seen what we wanted to see. She was heading toward higher elevations in Kingman, where I spent a couple of days during the Route 66 trip. I’ve already been there, and have been forming my own plans heading in a different direction, so we parted ways. The way things are going, I’m quite certain we’ll see each other again down the road.

My original short-term goal was Pahrump, where there’s enough civilization to get things done but enough BLM land to camp out for a little while as well. Birgit highly recommended checking out Valley of Fire State Park, where she and Tom spent some time. It made sense to make the quick detour to the northeast of Las Vegas before heading west to Pahrump, so this became my next short-term goal.

Much to my relief, Lister traveled rather well this trip. At times he expressed his displeasure with not being let out of the van, but not nearly to the levels of caterwauling he was doing before. He has a right to express himself, so this trip was actually enjoyable. Still, while I’m in civilization I’m going to investigate kitty calming options at a pet store. My mom had some good ideas about that (thanks, Mom!)

The route to Valley of Fire took me through the Lake Mead National Recreation Area. Some acquaintances from Quartzsite who I follow on Instagram are camped somewhere around here, which led me to investigate my options for doing the same. Being in the National Park system, my America the Beautiful annual pass grants me access at no additional charge. While there are numerous paid campgrounds, there are also many places for people like me to boondock for free, so that’s exactly what I did.

This is an interesting area, one that I will certainly explore on the bike very soon. There will be video as well as a post dedicated to this topic. But to summarize, Lake Mead was created by Hoover Dam, and is a very important reservoir on the Colorado River. While the lake was full in 2000 (ironically, my first time visiting), it’s down to only 35% of its capacity right now, thanks to a constant drought since then. Where I’m parked right now used to be underwater, and it should be if the lake is at a healthy level. But it’s not, so it’s become an additional area for campers to boondock beyond the Government Wash boat ramp, which now leads down to nothing but dry desert. A sign recommends four-wheel-drive past the gravel parking lot, but with good tires, slow speed, and choosing my line carefully, I had no problem driving down there, especially seeing other two-wheel-drive vans and RVs down here that have already done this successfully.

Unfortunately, that desert wind has picked back up again. I had to make my dinner inside the van because the wind would’ve blown out the flame on my stove outside. Cell reception here is excellent, though, a pleasant surprise after struggling in Arizona. For the first time in months, I’m able to put my T-Mobile hotspot to use, which will lighten my Verizon data load in case I need it again down the road. I’m sure being close to Las Vegas helps!

So tonight, we hang out inside the van. Lister did get some outside time before the wind became intolerable, so he’s happy. Tomorrow hopefully I can unload the bike and do some exploring, including riding some of the lake bottom that’s supposed to be underwater, but isn’t right now.