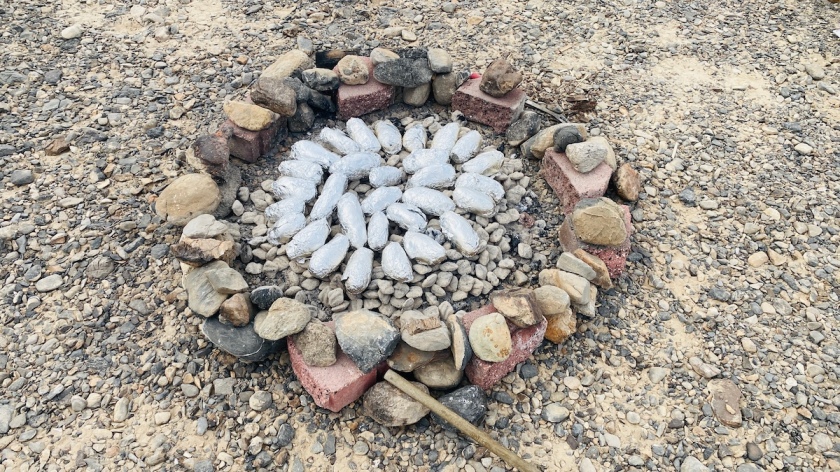 Toward the end of last week, some of my campmates threatened talked about getting a whole bunch of potatoes and cooking them up over the fire for everyone. That actually happened yesterday.

Most of our camp, as well as most of the women’s caravan that’s camped a mile down the road, came over to enjoy campfire-cooked potatoes with whatever fixings as we wanted. I was willing to share what I had, but the others had everything already covered. My camp table came in handy, though. Because it’s aluminum, we could put the hot potatoes wrapped in foil directly on top of it, without fear of melting through the plastic tables that held all the fixings. Since I wasn’t directly involved with the cooking, I also hopped a ride over to the women’s camp to toss their chairs in the back of a truck to bring to our camp while the ladies themselves walked.

Most of these potatoes were HUGE. One potato, plus bacon, cheese, sour cream, chili, and I don’t remember what else was on top, was a full meal for me. I would’ve taken a picture, but I was socializing, hungry, and just plain forgot. Sorry.

Between both camps, we had somewhere around 30 people hanging out. I’d been hanging out with several in my camp already, and it was fun to meet a bunch of new people as well. One of them, from the women’s camp, said “Hey! You’re Smokey Da Van!” That’s the third person in a week who’s recognized me. My new friends in camp make fun of me for being a big-time YouTuber. At 341 subscribers, I assure you I’m not. But as people keep recognizing me, I’m beginning to see their point, as well as get an idea of how Bob Wells must feel when people like me spot him in the wild!

This particular fan is starting to travel with two cats, and said she found my video on traveling with a cat quite helpful. I suspect she’s an even bigger fan of Lister than of me, so I invited her over to my van to meet the real star of the show. As usual, he soaked up every bit of attention that he could. I gave her a card and a sticker.

Around sunset — “the golden hour” — everyone was taking pictures and videos of the group. We almost bumped into each other in the process, and, well, we just owned it.

Today was a wind and dust storm. Nothing happened. Today was just working, chatting with friends online, and plotting my super-secret Next Big Thing (TM). I have to keep reminding myself that at least it’s warm, and you don’t have to shovel wind.