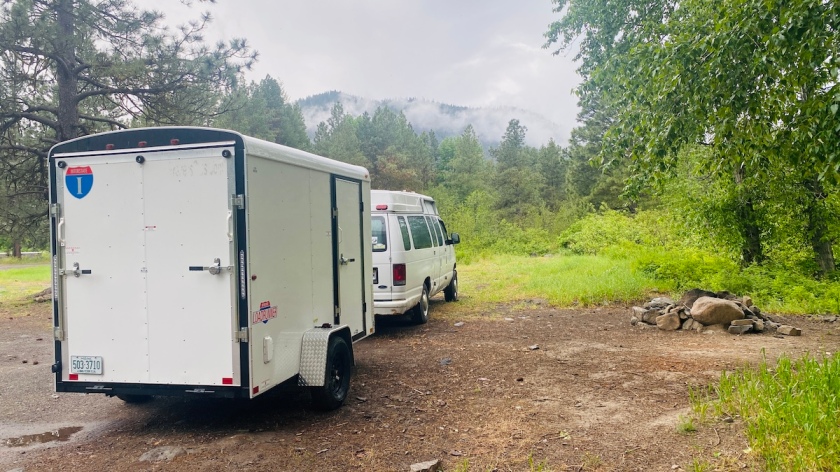 After lunch with Glen, I was less than an hour from my intended overnight stop, the Ranger Creek State Airport, of all places. I found this place on iOverlander. There’s a small airstrip along with several places to camp. The intention is fly-in camping, but there’s also a road in and out — sort of. The reviews said it was in terrible condition, but passable in a high clearance vehicle, which my van is.

The campsite was just a straight shot down Highway 410. I was smart and programmed it into my Garmin while I still had a cell signal. That way, when (not if) Google Maps forgot my route when I stopped to take pictures, I’d still have it on the Garmin. I pulled in, and just as the reviews said, the road was awful. I drove in at maybe 0.3 mph, but I made it.

It was raining pretty hard by now, so I didn’t take any pictures. Instead, I searched for the elusive internet. I had nothing on Verizon but found extremely spotty T-Mobile coverage. Someone else was already camped out in the one place where I got four bars. I found a place to park with three, though, and gave it a try. It was not reliable at all. I would’ve been fine not watching videos for a night, but I was having trouble even surfing the web, or loading up WordPress to catch up on blog posts.

I wasn’t feeling this place. It wasn’t just the bad internet (though I did find myself wishing for Starlink to solve this problem). It was also a bit cooler at 2,500 feet elevation. That’s not an issue in itself, but it was cold, rainy, and dipping into the 30s the following night with continuing precipitation. I could see snow all over the nearby mountains, and I didn’t want to risk getting stuck here without enough internet to work on Monday.

When I did get the internet to work briefly, I found another promising location about an hour closer to Yakima. I decided to move.

Soon after hitting the road, I entered Mt. Rainier National Park. I tried to get my dash cam turned on to capture it, but failed. It’s too bad, because despite most of the scenery being obscured by rain and fog, what little I saw was still breathtaking. I don’t think I actually got to see Mt. Rainier itself through the clouds and fog.

I couldn’t take many pictures because it was a challenging drive. I hit an elevation of 4,600 feet, into snowy areas, but fortunately, the road was clear. Some parts had steep drop-offs right next to the road, and very bumpy sections that bounced me all over the place. I was constantly trying to find places to pull over and let traffic by, because between the elevation changes and the bumps I was going pretty slowly.

One such place I pulled over, I decided to get out and walk around since there was actually a view. I didn’t even notice Skookum Falls up above at first, because the high, fast-moving river caught my eye first. The signs talk about why the water is white, but right now it’s actually brown, muddy from the vast amount of water coming down the mountains and taking some dirt with it.

Then I saw the waterfall towering high above, and was baffled at how I could’ve missed it before. I suppose it’s much more obvious when the river is at its normal height and intensity.

The challenging drive continued. No pictures, but I handled it okay. I turned off 410 onto 123, went over another mountain pass, and then turned east on US 12. I left one National Forest and entered another (I can’t for the life of me remember the names, and Google Maps isn’t showing them for some reason). The road wound alongside the Tieton River, which was also extremely full and fast flowing. Finally, I made my turn and arrived at the next potential campsite.

It’s a large dirt area with a few fire rings, and that’s about it. There was no one else there (an RV pulled in across the lot later), so I pulled into a campsite with a nice big fire pit. There’s a small grocery store just two miles up the road where I should be able to get some firewood if I want to. There was a bit of trash strewn about the campsite, so I cleaned it up. Why do people leave this stuff behind? It’s rude, it’s wrong, and it’s the sort of thing that gets places like this shut down so no one can use them.

I’m within sight of the Tieton River, and there’s a short path leading right to the river’s edge. I’m a good distance away from it, though, as well as a few feet higher than its current level. If it starts to flood, I’ll have a good amount of warning that I should move, so I feel safe where I’m parked. Best of all, although my Verizon signal is terrible, T-Mobile is working great. I have usable internet to catch up on all these posts, as well as work next week if I decide to stay that long.

Because I’m in a National Forest, and there are no signs saying otherwise, I can camp here free for up to 14 days. I doubt I’ll stay the full two weeks, but I may stick around a while, particularly if it stops raining. There are Forest Service roads all over the place, prime for motorcycle exploration. I need to redo my ratchet straps before I leave no matter what. The terrible roads over the mountains bounced the bike around inside the trailer so much that some of the straps holding it down came loose. But that’s why I use four, so one or even two can fail and the bike is still secure.

I don’t know what my plan is from here. I’m making this up as I go. This is actually a bit too freeform for me, so maybe I’ll spend a few days coming up with a more solid plan for at least the next leg of this journey.