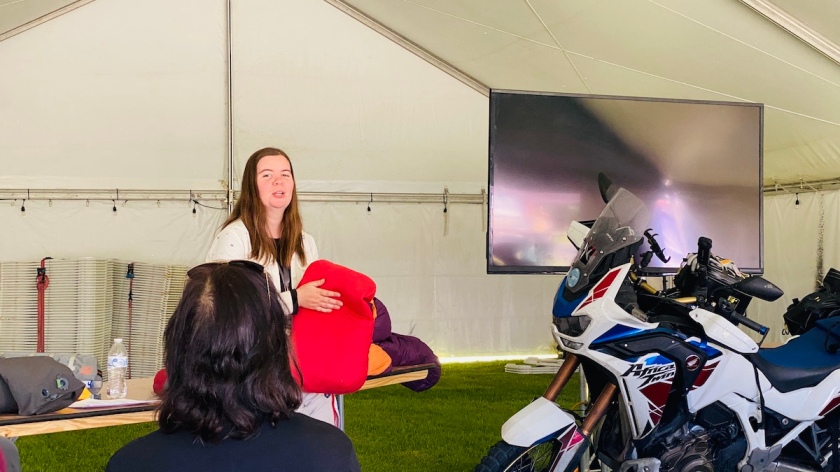 I’ve described the overall experience, the vibe, and the fun I had there. Overland Expo also has numerous classes and discussions throughout the weekend. I went to a few.

I’ve already done a great deal of motorcycle camping, and with a van, I don’t have to anymore. But I like Amanda Zito / As the Magpie Flies, and I wanted to support her, so I went. Despite my experience, I ended up learning a great deal anyway. Equipment has changed quite a bit since I was doing it actively. It’s gotten so much better, smaller, lighter, and easier to use. I still like my version of “moto glamping,” but I’m glad I picked up what I did from her. It was also great to see her Africa Twin that’s on long-term loan from Honda.

We hung out for a while after class. This was the first of many times our paths would cross throughout the weekend. She introduced me to a few of the other presenters. In fact, I’d already planned on attending his class later, which was…

Dealing With Anxiety On Your Adventure

I’ve struggled with anxiety all my life, including on my van adventures, so I was interested to hear what Mathew Sturdevant had to say on the subject. He conquered, or at least controlled, even worse anxiety than I have, though it wasn’t an easy path. He tried to ride the Trans-America Trail, tapped out partway, but returned to finish it later. He gave some great advice to try and stop your anxiety from spiraling out of control while on the road, a feeling I’m all too familiar with. Mathew has also written a book, The Topography of Fear, on this subject. I bought it, and am reading it now.

Mathew’s story and advice were one thing, but just as helpful is knowing that I’m not alone in struggles like these. Here’s someone else who has been there, done that, battled demons as least as strong as mine, and won. Aside from his advice for the logical mind (which sometimes gets completely illogical when fabricating beyond worst-case scenarios), it’s inspiring to know that he’s not only worked through these issues but turned them into something positive for people like me.

I’m a ham radio nerd, but I was curious about what overlanders use for communications, which is what brought me here. Between military and emergency services, Clifton Slay knows communications inside out. Being a 101 class he kept things very simple and talked about a few types of communications that are easy and accessible to everyone. He described several different types of radio, including FRS, CB, and GMRS. He didn’t touch on ham radio too much, mainly because despite its numerous advantages over the other services, it’s also more technical, requires a test and a license, and is less accessible than the others. CB has fallen out of favor with Jeepers and overlanders these days. While some groups have switched to ham radio, GMRS is booming in popularity, especially since the cost of a license dropped from $70 to $35 every 10 years. That’s partly why I just made the jump myself, and am now WRTI386 in addition to KJ1H.

My next-door camp neighbor had asked about ham radio in class. Although the class didn’t really go into it, later that evening I told him I’ve been a ham for years, ask me anything. I ended up hanging out with him and his family over a couple of beers talking radio. They’re true overlanders, with a modified Jeep and trailer all ready to tackle some tough terrain. Once again, it was fun to “cross the streams” between my lifestyle and true overlanding.

While talking about riding is no substitute for actually doing it, I did pick up some great information here. Bill Dragoo runs Dragoo Adventure Rider Training out of Oklahoma, as well as the adventure rider training going on right there at Overland Expo that weekend. My main issue with riding off-pavement is remembering to stand up. There are many advantages to doing so, all of which improve control over the bike on loose surfaces. Without even riding a bike, he and his crew demonstrated many of the ways this works on a bike sitting still, a demonstration which sticks in my head and might remind me to get off my lazy butt when riding on dirt. They covered many other topics as well, but my brain couldn’t absorb the wealth of information coming at me like drinking from a fire hose.

This was nothing more than a live recording of an Overland Journal Podcast episode. It interested me because the guest was Amanda Zito. Yes, I really was stalking her this time. It was a good chat. I’ll add a link here once the podcast is published.

I know the answer to this, but I went hoping to meet some other full-time nomads like myself, swap tips, and make some contacts. Instead, the audience was entirely people who have never lived on the road full time. The presenter, John Kingston, has only been on the road full-time for three months. I must’ve mumbled something about being on the road for over a year, because the next thing I knew, John pulled me up front to give the class with him! It was more of a question-and-answer format, which made it quite easy for me. Someone would ask a question, he’d answer, and then I’d answer. Sometimes we’d agree, while other times we had wildly different opinions. That was great and gave the audience some different perspectives.

It went really well, especially considering that I had absolutely no intention of speaking or teaching at Overland Expo. But maybe I should…

I woke up early Sunday morning, geared up to the max, and took the KLR over to the course where the motorcycle training had been going on all weekend. Bill Dragoo and his crew were there, with several exercises set up around a dirt area. These were all exercises they were teaching and practicing in class, but from 8-10 the course was open to anyone who wanted to try it out for themselves. This was why I was here.

Unfortunately, all I really learned was how little I know about dirt riding. I was never good at the figure-8 in a box exercise on pavement. Put it on dirt, while standing up, and I just couldn’t get it right. I would’ve been willing to try the exercise of climbing over an obstacle, but I still have a weak fork seal, and the people who did it well were literally jumping their bikes off the obstacle. I didn’t want to put my weakened suspension through such a hard landing. And the loose, steep hill of dirt that people were climbing across and over at all weird angles was just far beyond my skill level.

At least I knew what I didn’t know. As I was chatting with one of the other riders who teaches wilderness skills, he called me a “conscious incompetent.” This was not an insult, nor did he mean it that way, but the truth. It’s actually a good place to be. I knew I was in over my head, so I didn’t do anything stupid and get myself in trouble. That’s better than the “unconscious incompetent,” with the attitude of “I can definitely do this” but lacking the skills to back it up. Those are the people who get themselves in the most trouble.

There were many, many more classes and discussions throughout the weekend. This is just the small sample of them that I attended. Good stuff, all around.