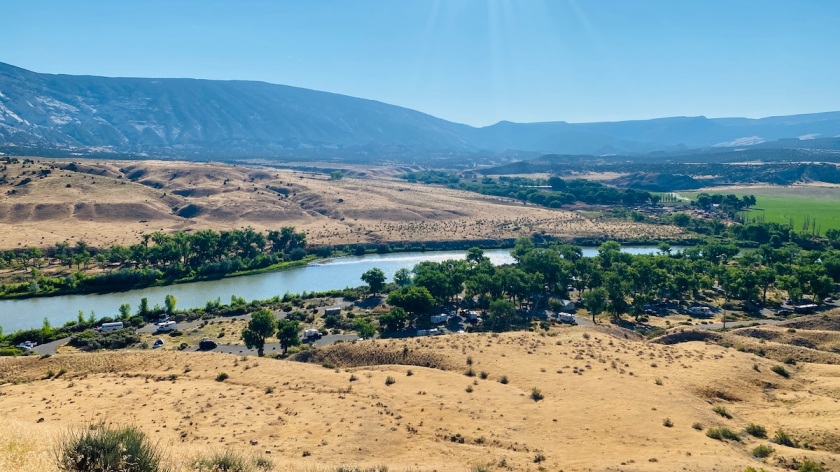 Since Honey Badger had booked me a two-night stay at Green River Campground inside Dinosaur National Monument, it was time to slow down and explore the area instead of putting miles behind me. I arrived Friday afternoon after my America the Beautiful pass got me “free” entry into the park.

My first of two campsites was waiting for me. It was little more than a pull-off with a picnic table and fire ring, but it was good enough — a place to park, and a good home base while I explored the rest of the park on the bike. It was hot, though, with no shade. I improvised what I could with my shade cloth, and it helped a little. Once the sun went over the hill it got downright comfortable.

Dinosaur is an International Dark Sky Park, and the stars sucked me in. I ended up just lying down and staring up for a while. Losing count of stars was a given, but I also lost count of how many satellites I saw (sometimes multiples at the same time), as well as meteors. It turns out the Delta Aquarid meteor shower peaked this night, putting the icing on the cake of the most amazing night sky I’ve ever seen.

The next day started with a motorcycle ride. My goal was Harper’s Corner Drive, a 32-mile road to the center of Dinosaur’s canyon area. This was going to have to be a quick out-and-back ride because I had to move campsites mid-day, sometime around check-out and check-in. It wasn’t a big deal, but it did blow a hole in the middle of my day. No big deal, though.

I followed US 40 all the way to the town of Dinosaur, Colorado. This time, my bike entered a new state before the van did. Shortly past the center of town was the left turn onto Harper’s Corner Road. Who said paved roads aren’t fun? This one certainly was. It was fairly early in the morning, and I had the road pretty much all to myself. Only another motorcycle, a ranger, and a few bicycles shared the road with me for the ride out. Because I was pressed for time, I didn’t make any stops on the way out to make sure I got to do the whole road. I might have proceeded at a fairly brisk, fun pace. With all the dirt riding I’ve been doing I’d forgotten how much fun a curvy paved road can be. Then I took the trip back more slowly, stopping at all the overlooks and taking pictures.

I took the unique opportunity to park in two states at the same time. Like I said, the road was quiet.

There are signs all up and down the road warning about free-roaming livestock. They’re not kidding. I saw the occasional cow, and even a family of wild horses roaming around. None of them were standing in the road, but they were right next to it.

One overlook gave an amazing view of the unimproved 4×4 roads leading off to the east. There are two main ones, Echo Park Road and Yampa Bench Road. Echo Park Road leads 12 miles to Echo Park, a dispersed campground in the middle of the canyons. Yampa Bench Road goes 18 miles off of that toward the southeast corner of the park, with dirt county roads leading back to US 40. That seemed like it would be an all-day trip (18 miles doesn’t seem like much until you’re riding over rough terrain, then it takes a while), but Echo Park would be a fun out-and-back trip that would only take a couple of hours. Unfortunately, I didn’t have time to do it today, since I had to move campsites. I had a plan for later, though.

I knew how to get back to camp, but I asked my Garmin to give me a route anyway. I knew there was a gravel road shortcut back to camp. It ended up taking me a different route than I’d planned on, but I remembered Google trying to take me out to Harper’s Corner by some strange route through the park as well when I first looked it up. I decided to give it a try since I could tell from the ETA on my Garmin that I had time to backtrack and go back on US 40 if I had to.

These may have been county roads, but they were pretty rough in places. It was nothing my KLR couldn’t handle, but I wouldn’t want to take my van down them. It was a fun ride but a steep descent into the valley as well. I spent a lot of time in first gear, using the brakes to manage my speed as well. The dirt changed from brown to red as I descended. I felt like I was in an eveRide video, since the landscape looked the same. He’s in Utah as well. In the end, I started seeing signs for sights in the park. Finally, the road turned back to pavement, and I was on the road leading back to the campground. It actually went through! I have no desire to ride it again, but the adventure was definitely worth it the one time.

I parked my bike at my new campsite, walked back to my old one, and drove the van and trailer to the new one. This was a much larger site, and a tree provided excellent shade while not blocking Starlink. Lister enjoyed this site much more than the last one.