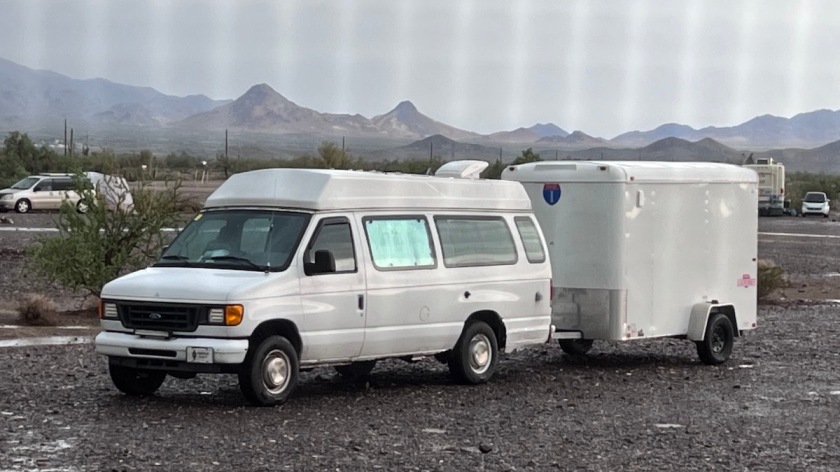 The forecast had been calling for another round of severe thunderstorms yesterday because we’re in the monsoon season that never ends. People tell me that storms like this usually stop happening in mid-September, but here we are a month later and the cycle is still going. Fortunately, we had a warning. The forecast said the storms wouldn’t start until noon, so I enjoyed the company of a small crowd at the Lit Cactus on Friday night since I’d have hours to calmly pack up camp while it was cool the following morning.

I could see storm clouds off to the north and east, lightning and all, but they were still fairly distant. I didn’t know if they were coming our way, though, and remembered how fast the last one hit. There was no time for organization, just loading the trailer in such a way that I hoped things wouldn’t fall over if I had to move. I tied the motorcycle down, so at least it’ll be okay. Then I hitched up the trailer to the van, all ready to go. My intention was to not go anywhere, but if flash floods came our way, I was ready to leave immediately. Plus, it’s less likely I’ll lose the trailer in wind and rain if it’s attached to a four-ton van on one end.

As usual, I plan for the worst and hope for the best. I was all packed up and prepared to move if I had to. If I wasn’t, the flood would come ripping through here and wash my camp away. So fellow La Posa South campers, you’re welcome. I prevented the flood by being ready for it so that we wouldn’t need to be.

The real storm hit just after noon. It was much like the one I sat through last week, except this time it was during the day, so I could actually see what was going on around me. The lightning, while there, wasn’t nearly as intense as the last one. I left the ham radio tuned to the local Skywarn net, which was reporting cells coming into Quartzsite, flooding, and any National Weather Service alerts. There were reports of hail nearby, but none fell here. I was fortunate to have nothing serious to report to the Skywarn net myself.

At this point, I was pretty much in for the duration, keeping an eye on my surroundings but not doing much otherwise. I watched some YouTube videos, including Where the Road Ends, about a group of veterans who rode KLR650s from the top of Alaska to the bottom of Argentina, including the infamous Darien Gap. I might write that one up for ADVRider. I took down my Starlink antenna for the storm, but I had plenty of data left on my Verizon hotspot and not a lot of time left on this billing cycle, so I used a bit of it before it reset.

During and after one particularly intense cell, I watched the wash I’d parked near (and moved the van away from to hook up the trailer) fill up with water. That’s nature doing its job, right there. The clear area our group is parked in had virtually no standing water the whole time, because it all drained into these low areas and flowed away.

The water moved quickly, as you can see in this video clip. After the rain stopped, it didn’t take long for the water level to drop. I took this picture just half an hour after the previous one.

The storms ended just a bit before sunset. The wash was already empty before dark.

I left the van and trailer hooked up overnight. I didn’t want to set up camp again in the dark, but more importantly we were under a flash flood warning until 9:00 pm. The major washes in and around town were flowing with runoff from the surrounding mountains, blocking the roads they flowed across. Scale up this little wash by an order of magnitude or two, and you can see why officials practically yell at you to not drive across them when they’re full. The force could sweep you away. But we had no problems overnight.

By morning, the area had already dried out, and you couldn’t even tell we had monsoons yesterday. I’m slowly setting my camp back up the way I had it before, because I really liked that setup. The sun is out, giving my new batteries plenty of charge. I’m also running the generator to throw as much power at them as I can to get them fully charged. Then I can take advantage of my vast reserves of power if I need them later.

Moved back to my old spot today. Lots of last year’s crew just arrived there this week, and we’re getting the band back together! 😎😎