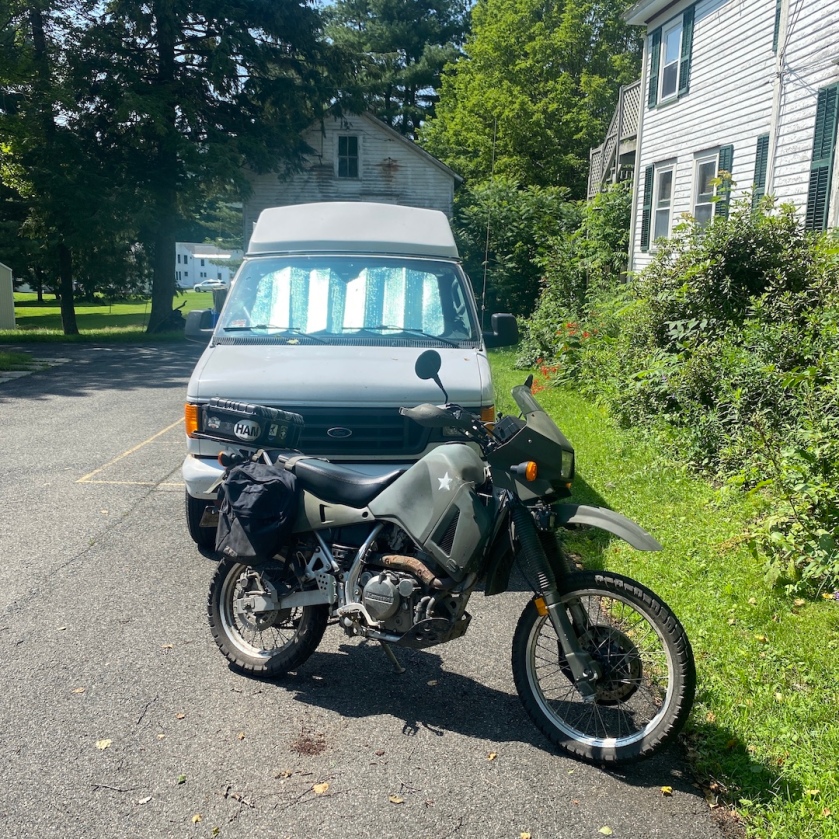 It’s been an uneventful week in western Massachusetts. That’s not a bad thing. I’ve gotten a fair bit of work done, both with the day job and with some tweaks and additions to this website. I got a good bike ride down Route 116, my favorite motorcycle road in the area, which starts just a few miles from where I’m staying. With everything going on, a nice fast romp down a road I know well was exactly what I needed to clear my head. My only police encounter was a big friendly wave from one working a detail.

My native Masshole roots showed when I stopped at the packie (local slang for “package store,” which is where you get your beer, wine, and other booze) and picked up some hard cider brewed in the town I grew up in. Back then, Carlson Orchards was simply that, an apple orchard, with a small store just north of the center of town. The store is long gone, replaced by the new post office, but the orchard is alive and well, branching off in new directions such as hard cider. Oak Hill is where the orchard is located, the highest point in town. Trust me, I rode my bicycle up it enough times as a kid.

I’ve also been making travel plans. Tomorrow I head to New Hampshire for the next little while. I’ll be driveway hopping between a few different places until I head to the Sunday River ski area in Newry, Maine for the New England Forest Rally in two weeks. After that, I plan to bum around Maine for a couple of weeks until Climb to the Clouds up Mount Washington, New Hampshire.

It’s strange. I’m back in the area I’ve lived all my life. But it doesn’t feel like home anymore. Familiar, absolutely. I’ll never forget the rolling hills, lush greenery, and unpredictable weather of New England in the summer. It’s wonderful to catch up with old friends, not to mention have worry-free parking in their driveways while I’m here. It’s not the same as when I lived here, though. I’m wondering if this might be my last visit to the northeast for a little while once my commitments here are complete.

The thought has certainly crossed my mind of giving up on van life altogether. Doing it alone is not at all what I signed up for. When I haven’t been visiting friends, I’ve found it very lonely in the van by myself. My prevailing thought, however, is to go west. I’ve never traveled much in my life. What little I’ve done has been mainly up and down the east coast, including my van travels so far. There’s so much more of the US to see (plus Canada, if/when the border eventually reopens — Trisha not having a passport is no longer a limiting factor). I’m not just setting myself up to take the journey of a lifetime, I’m already doing it, successfully. Why stop now? Rather than burdening myself with places I have to be, I should finally venture to the places I want to be.

Many of my friends, both new and old, agree. While this is a decision I have to make myself, having their encouragement to “go west, not-so-young man” is helpful. It’s especially vindicating at a time when my life has completely exploded not once, but twice in the past three months. I don’t have a lot of confidence in my own decisions these days, but I get a little bit more when others, more level-headed than me at this point, are coming to similar conclusions.

Perhaps the final straw is that for the first time in my life, New England doesn’t feel like home anymore. That train has sailed. The only roots I still have here are friends, who I’ve already been keeping in touch with online rather than in-person throughout the pandemic, and my storage unit, which can be relocated elsewhere if I choose to. It’s a strange feeling. Not unpleasant, just unfamiliar. For most of my life, I’ve wanted to leave New England. I’ve wanted to move someplace warm and escape the cold six months of winter. Now, finally, it feels like I’ve done that, just in a different way than I expected.