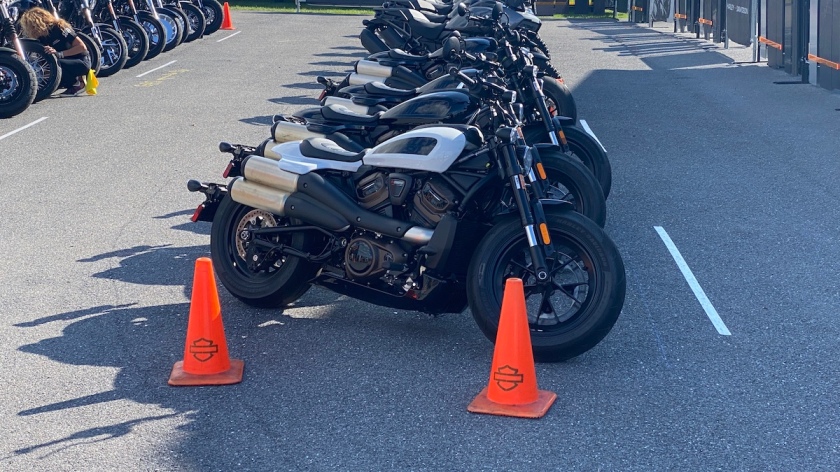 The weekend was a whirlwind of motorcycles at IMS Outdoors. I literally lost track of how many I rode, and I never even unloaded my own bike from the back of the van. If you’re interested in my thoughts on specific makes and models, or general impressions of the show, keep your scanners peeled at Piston Slap. I’ll be writing up all of that over there. If you don’t care, that’s fine too. I’ll keep my thoughts here limited the #vanlife aspect of it all.

I didn’t spend a ton of time at the van. In addition to the show itself, many manufacturers had demo fleets there, providing the opportunity to actually try riding their motorcycles instead of just sitting on them. That’s how I spent the majority of my time, trying as many bikes as I could. The one pictured above is the new Harley-Davidson Sportster S. It just came out, and I’m probably one of the first to actually get a chance to ride it. That’s pretty exciting.

I also went to a couple of talks by Bret Tkacs, a motorcycle instructor and YouTuber who I’ve been following for a while. His tips for how to pick up a dropped motorcycle will be particularly useful in the future, as I have a way of doing that when I ride off-road. It was also great to meet him and swap contact info. The more famous (or semi-famous) people I meet, the more I realize they’re just people like you and me.

I was riding on a high of “bike, bike, bike” through Sunday afternoon until the exhaustion kicked in. (I almost said “crashed” but that would imply the wrong meaning.) First it was physical. So I stopped riding demo bikes. Besides, on my last test ride I noticed other people on test rides starting to ride kind of stupid, and I didn’t want to be out there on the road with them. Instead I test drove the Kawasaki Teryx 1000 side-by-side on an off-road course. My van can’t do that.

Then I just settled in at home for the night. I gave Lister some well-deserved outside time, which he’d been lacking while I’ve been off riding motorcycles. What few campers there were at the Carlisle Fairgrounds packed up and left, leaving me there all alone. That was when the emotional crash came. I was basically riding high all weekend, and then suddenly it was over. What do I do now?

Fortunately the crash didn’t last all night. I made dinner. I came up with a vague sort of plan. I’d been pondering visiting West Virginia, since the motorcycling there is supposed to be excellent. I haven’t been able to figure out a plan, though — what roads, where to stay, where to go, etc. Meanwhile, I already know what my next major stop will be, visiting Meg in Illinois. I started looking for interesting places to see between Pennsylvania and there, and easily found a few. So I think I’ll skip West Virginia and start heading west. After all, heading west is what Smokey Coast to Coast is all about anyway, right?

This plan also keeps me on track to potentially meet up with the Route 66 convoy in just under three weeks. Joliet, where the group will meet, is only two and a half hours away from Meg. As a huge Blues Brothers fan, the thought of visiting some of the filming locations there is appealing. The West Virginia plan was giving me some resistance, while going west across Ohio and Indiana is not. I’ve learned to pay attention to such things and follow the path of… maybe not least resistance, but certainly less resistance. I’m sure I’ll be back east sometime, and West Virginia will probably still be there. It’s not calling to me the way this journey to the west coast is.

Sometimes I amaze even myself. This van has never been able to lock out overdrive for towing or highway ascents the entire time I’ve owned it - until now.