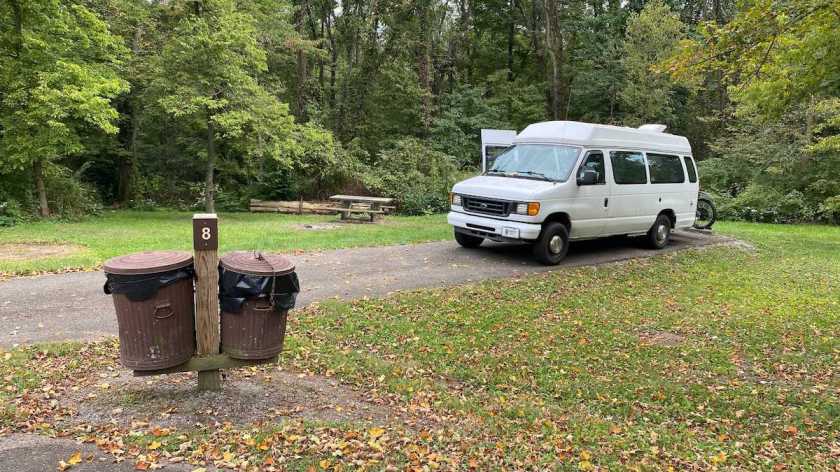 It was a quiet night at Chateau Walmart in Delmont, Pennsylvania. I’d rolled in around 10:00 pm, parked, and went to bed. I needed some supplies, plus a new pair of shoes (the ones I bought after the fire in March had already worn out, and those weren’t cheap Walmart specials), so I took advantage of the early hours to do some shopping before the place got busy. With the possibility of a company meeting in the afternoon (it gets canceled a lot, but I have to be ready for it regardless), I decided to immediately hit the road toward my next destination.

I did not enjoy driving through the suburbs of Pittsburgh. It was the first real traffic I’ve run into since leaving New England. People drove like idiots, particularly the woman who ran both a stop sign and a “no left turn” sign to cut me off and steal the gas pump I was already backing into. She’s lucky I actually use my mirrors when I’m backing up.

Once past the Pittsburgh area, though, I left the city and oil refineries behind and returned to rolling hills and farms. My destination was a free campground I’ve stayed at before: Hidden Hollow Campground just over the Ohio border. This was where I fled to immediately after the breakup with Trisha. I didn’t return for any sentimental reasons at all. It’s simply a known-good place to spend a night, roughly two hours away from my previous stop, which is about how long I prefer to drive on a work day. It also gives Lister a lot of outside time, which I hope will make up the lack of it he got yesterday due to me having a bit of a social life, for once.

It seems I’m entering the stage of my travels where I’ve built up a personal database of such known-good places to stay, and begun to revisit some of them. The idea of Smokey Coast to Coast is to boldly go where I haven’t gone before, but the route between Pennsylvania and Illinois covers much of the same ground I covered back then. It makes sense that the routes are similar, and therefore the same overnight stops.

Sure, there’s a little emotional baggage here. I made a deliberate choice to stay at a different campsite than last time. I’m not feeling all sad and mopey, though, like the last time I was here. I’m feeling more at peace, and a sense of closure. I’ve quite literally come full circle, back around to where this all started. I’m not ashamed to say I’m in therapy, and the end of that relationship has been a frequent topic of discussion. Again, I’m not going to air dirty laundry here, but I will say that my therapist recently told me “this is the end of the chapter of Trisha.”

Being here, now, really feels like that. I’ve done my big lap of New England. I’ve leaned on friends to get over the split. Now I’m back where I started, and ready to move on. It’s funny how I ended up here, and just how symbolic this is, regardless of my past relationship. But this time I’m going west, toward the future, and not east toward my past.

It’s also fitting that unlike last time, when I stayed here several days to collect myself after the split, I’m only spending one night, then moving forward. By the time you read this, I’ll already be gone. I know what I’m doing, and where I’m going. Let’s do this.

We’re in the old west now.