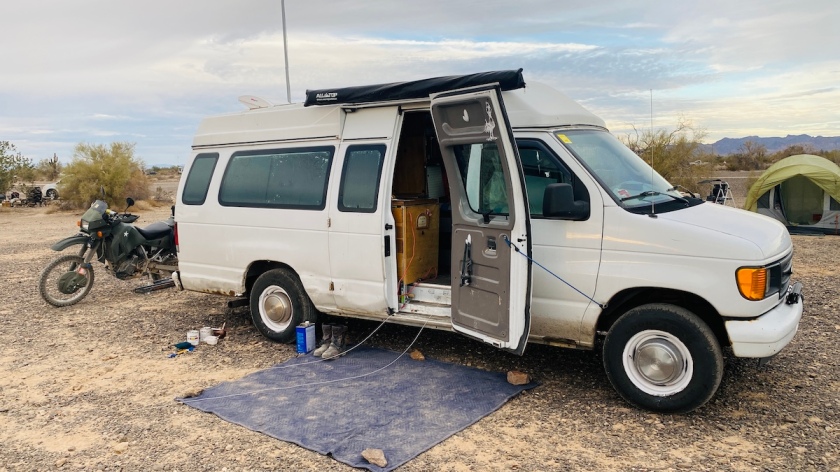 I just realized it’s been a minute (ok, a week) since I posted anything here. Between goings-on in camp and the Rubber Tramp Rendezvous I’ve been busy in the real world and pulled away from doing things online. (Maybe this wasn’t the best time to relaunch my YouTube channel?) Let’s catch up a bit.

We’ve had some disagreements and departures in what I thought was a rather utopian camp. I don’t want to get into what happened, who did what, or anything like that. Dragging names through the mud is not my style, and it wouldn’t change anything anyway. I’ll just say that if a situation seems too good to be true, it probably is.

I’ve been reeling a bit from some lost friendships that I thought were close. I hate drama, and I try to avoid it at all costs. But it happens, even out here. We’re all human, and I guess I can’t escape it.

It hasn’t been all bad. Far from it. Wayne grilled up some barbecue chicken for us the other day. Darrell wanted to get rid of some old paint he had, dropped absolutely everything I’d need to repaint my rusty old wheels next to my van, and told me to use it. So I did. It really improves the look of the van, I think. As the Dude might say, “It really ties the room together.”

I finally got to fly my new kite. I bought it the day I rolled up on that motorcycle crash. It was literally in my saddlebag when all that happened. With the constant wind in Quartzsite, I feel like I’m playing a video game on its stupid easy setting. I don’t have to run or even walk to send it aloft. Simply unfurl it, hold it up, and let go, then let out as much string as I want to send it up high. It’s a single-string kite, so the only control I have over it is altitude, but the guy who sold it to me recommended something easy to fly to start, and he was right. I’ve been too busy the last few days to fly it more, but I will again.

I took the opportunity to visit the camp of Adventure Van Man, who I’ve been following for several years. Brian is just as kind and welcoming in real life as he appears in his videos. We talked about motorcycles a bit since I know from his older videos that he rides as well. Many others were showing up, both to visit and to camp out with him — a risk you take when you’re a popular YouTuber who puts your location out there publicly. But he made it a point to welcome and chat with all of us, which was great.

Yesterday I gave my presentation at the RTR about the basics of getting online from the road. Amanda wasn’t there, so I was on my own. I nailed it. It was great to see some familiar friendly faces from camp in the crowd, but I did just fine regardless. I know the material, and I was even able to answer most of the random questions from the crowd. People seemed to enjoy it and learn from it, so I’m glad. I got the proverbial hook off the stage after an hour, then hung around answering questions for almost another hour afterward. Clearly, there’s interest in this topic. Yes, I will be making posts and videos about this in the future.

I had to keep the volume down to a dull roar after the presentation because Bob Wells was doing a livestream not too far behind me. After my own audience dispersed I stood in Bob’s small audience and watched the tail end of it. I even got to pet Cody, Bob’s dog, who one of the security people was looking after.

Once the livestream was done, I got to talk to Bob myself for a few minutes. His videos were my introduction to van life, as they were for so many other people. They showed me a different way of living, and they taught me how I can do it myself. So I took the opportunity to thank him for all he’s done, for the community in general as well as for me in particular. I told him the short version of my story, which he said sounded very much like his own. I’m sure he gets literally thousands of people like me surrounding him, telling their life stories, and so on. There are reasons why three security people were standing right there as well (one of whom loved my “White and Nerdy” hoodie that I wore for my presentation). But Bob was most gracious with his time, and I didn’t waste any of his.

Bob’s great, but I’m still not sure whether meeting him or Cody was the greater honor…

Today I took the opportunity to weigh my van and trailer, fully loaded for travel.