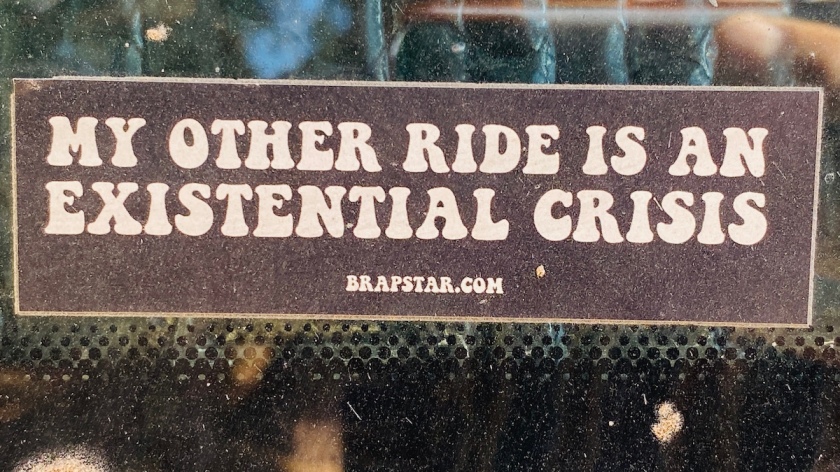 There are reasons why I have this sticker on both my van and my bike. While each of them is my actual “other ride,” this whole van life journey has also been a bit of an existential crisis for me. I’ve never been very good at figuring out what I want, and that remains true today. I’m not sure why, but I was feeling this particularly acutely when I woke up this morning. My time hibernating in the southwest will soon be over, once temperatures get hot. Yet I’m still not clear on what I want to do from here.

Last year, I had solid plans pretty much the whole time. Certainly, the breakup with Trisha threw an enormous wrench in those plans, but I still had my New England commitments to make, and then I made new plans — go west, drive Route 66, visit LA, visit Quartzsite… Despite starting to move around again the past couple of weeks, I’m still lacking a clear direction like I’ve had in the past, as well as a clear desire.

Since arriving back at the Senator Wash Reservoir, an enormous flock of vultures has been hanging out nearby. A few have even buzzed me at treetop level — not in any remotely threatening way, just doing their thing.

“Vulture may come to you as a Spirit Animal when your life is heading in a whole new direction. Vulture symbolizes rebirth, so whatever is happening right now is pretty dramatic. Release yourself to the winds of change and fly with Vulture.”

I still have my two possible plans for this year’s travel. Both involve heading to the Pacific Northwest. Plan A involves a cross Canada trip, while Plan B is to remain in the US and explore western places I’ve never been to before. I’m meeting a lot of people who hail from the Pacific Northwest, though, many of whom will give me a place to stay if I make it up to the area.

But with gas prices on the rise (particularly in California, where they were sky high already), I’m beginning to consider a new Plan C: Remain in the southwest, going up in elevation rather than driving many miles to remain in comfortable temperatures. That’s what a lot of van lifers do. If prices keep going up, particularly for gas, I could skip that long-distance travel plan.

It finally occurred to me that I’m parked next to trees, and I can finally set up the hammock I’d been carrying around for months. For the first time, I didn’t have to use the van as one of the anchor points. I have a pretty comfortable setup behind the van, above the pine needles where Lister likes to lounge. I took a snooze, pondered my options, and didn’t make any real progress on deciding what to do.

I’ve been chatting with Christina Coloradoan on Instagram. We’ve been following each other for a while, and she’s currently camping right across the lake from me at the LTVA. We’ll probably meet up later this week. As an experienced west coast camper, she pointed out that if I’m going to head up the west coast, I should probably get moving soon, so I can get it done before the area catches on fire, as has become the new normal these days. I do want to see what will happen with gas prices over the next couple of weeks, as well as any other side effects the war in Ukraine is likely to have on us in the long term. But, she makes a good point.

Lister hopped in the hammock to visit, but it turns out all he was interested in was using me as a perch to chew on some new pine needles. I don’t know what this guy is thinking sometimes.