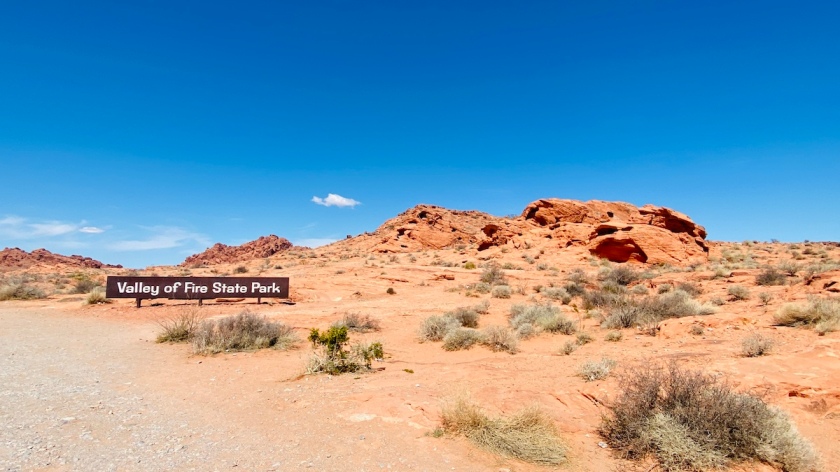 My original plan was to drive to Valley of Fire, then stay on BLM land just north of there on Route 169. But I really like my campsite on the beach, so I decided to leave the van there and take the bike instead. My friends in camp even offered to keep an eye on Lister for me while I was gone, which meant I could take more than the usual hour or two I’m comfortable leaving him unattended when I’m alone.

The big surprise was that the road to get to Valley of Fire was one of the most enjoyable rides I’ve taken since the canyons north of Los Angeles. The road is as smooth as glass. There’s no traffic. The speed limit is 50. It’s a seemingly endless series of long, fast sweepers through the desert (in reality about 40 miles from my camp). After spending the winter either bouncing down dirt roads or being bored on a 65 mph straight road, it felt great to let ‘er rip a little down here. I saw quite a few other bikes out as well. I’m sure it’s a bit busier on the weekends, but on a weekday it was very quiet.

One issue, though, is that I left with about half a tank of gas, and I was going in a direction where I didn’t know if there was any. With an 80 mile round trip, plus cruising around Valley of Fire, I wasn’t sure if I’d have to cut my trip short due to low fuel. I’ve been running into this issue more and more these days, camping in places that aren’t close to gas stations. I’d really like to carry a small gas can with me for situations like this, so I could just top off the bike, then refill it the next time I fill up the van. But I don’t want one inside my living space, and if I strap one to the outside of the van it’ll get stolen faster than you can say “gas is expensive.”

But I saw signs for gas at Echo Bay, so I followed the side road for a few miles. There are a few RV parks that are supposed to be right on Lake Mead when the water is as high as it’s supposed to be. Sure enough, there was a Sinclair station at the main convenience store. I expected to pay through the nose for gas because of the remote location, but $4.39/gallon was even less than I paid at Running Man in Parker, Arizona, which was the cheapest gas around when I left Quartzsite. With my tank topped off, I no longer had to worry about cutting my trip short.

Soon enough, I found the park entrance. A woman I’d met at Government Wash told me I had to do some kind of online timed entry system to get in. That was probably true before COVID completely disappeared from the face of the earth when Russia invaded Ukraine (that’s sarcasm). At the east entrance, though, it’s a self-pay system, which completely clogs up the parking lot with people filling out envelopes and depositing money. It’s a good thing I could tuck my bike in a non-space out of the way. I paid my $15 for a non-Nevada resident day pass ($10 for residents). Now I had a tag I was supposed to hang on the rearview mirror, which doesn’t work on the bike. Instead, I hung it from my brake lever when I was parked, and stuffed it into my pocket when I was riding.

After looking at these photos (which I promise I haven’t retouched in anyway except for resizing), you can probably understand why this place is called Valley of Fire. The reds and oranges really are this brilliant. There are all kinds of places to explore, especially if you’re up for a little bit of a hike. There are hikes for all ability levels, including “none at all.” Since hiking in motorcycle gear is heavy and hot, I didn’t go too far down any trails myself.

Some places are a bit lighter in color. With such excellent visibility, you can see almost a rainbow of colors in the rocks out here. It’s not quite as spectacular as the Painted Desert, but very little is.

I did make the climb up Atlatl Rock to see the petroglyphs. These predate all European colonization of North America, going back hundreds or even thousands of years. The bow and arrow hadn’t been invented yet, but they used atlatls to hurl spears at their targets. People, atlatls, and pronghorns are all clearly visible here, as well as other symbols we’re not sure about, and probably of a spiritual nature.

I rode all over the park. I stopped by the visitor’s center (and got a sticker for the van’s headliner), took the side road up to White Domes, and went all the way to the west gate. Beyond lies I-15 back to Las Vegas, which I didn’t feel like taking, so I turned around and went back the way I came because riding through the Lake Mead National Recreation Area was so fun.

I would say that Lister was happy to see me when I got back, but the truth is he was far more interested in sampling the local vegetation.