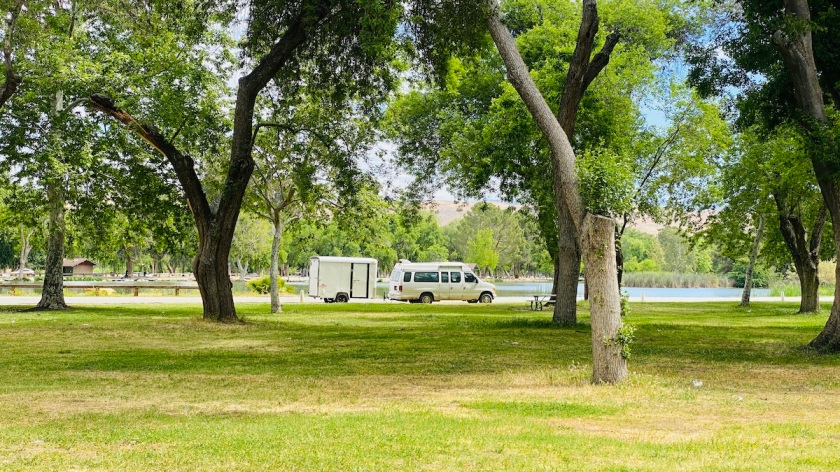 I knew I’d missed trees and grass, but I didn’t realize how much I missed them until I saw them again. First, though, let’s back up.

The wind woke me up before the sunrise. It was strong and gusty. Here we go again. I checked the various weather apps, and saw that it was only going to get stronger as the day went on. If I did my usual routine of having a lazy morning, getting some work done, and doing some driving in the afternoon, I’d be driving through some strong crosswinds down US 395, which would be particularly dangerous with a tall van and a tall lightweight trailer. I couldn’t get back to sleep with this thought in my head, so I made good use of my time and hit the road at 6:30 am to drive out of the wind before it got too bad.

My destination for the day was Bakersfield, only because it was about two hours away according to Google (so more like three or four in real life), and there are a few places I can stay overnight nearby before moving on. There were a few routes I could take to get there. I decided to take Highway 178 through Sequoia National Forest. Part of the reason for this, rather than the freeways, was because the wind was coming out of the west, and this route would get my nose pointed toward the west as soon as possible, turning the crosswind into a headwind before it got dangerous. The other reason was simply because I wanted to see the Sequoias. After months in the desert I was almost desperate to see green again.

This plan worked well. While there were hills, they weren’t as steep as the ones coming out of Death Valley, so the van handled it just fine. I stopped by the side of Isabella Lake, an oasis of civilization and internet connectivity. Since I work for an east coast company, my co-workers were already online. I was able to get the answers to my questions from yesterday, and get a bit of work done.

It was also a safe place to let Lister go exploring. He was antsy because I hadn’t let him out before leaving Fossil Falls due to the wind, so this made him happy. At one point he was positively frolicking in the sand, running around in circles like a complete idiot. I can’t say I blame him. For the past few months the ground has been mostly rocks on the desert floor. He was probably thrilled about the soft sand. He also climbed up on this historical monument, claiming it as his own.

Continuing down the 178 I soon entered Sequoia National Forest. Slowly but surely, after the last mile-high mountain pass, the browns of the desert and mountains started giving way to vegetation. First I passed more dense forests of Joshua trees than I saw in Joshua Tree National Park. Pine trees started to appear, and then the types of trees that I’m more used to from the east coast. Even the ground started turning green as grass appeared on the hillsides. It made me happy.

The driving itself was… not quite challenging, but it certainly required my full attention. The photos you see here involved the advanced photographic technique of “spray ‘n’ pray.” In other words, blindly aim the camera without even looking at it (my eyes were on the road where they belong) and snap a whole bunch of shots, hoping that at least one of them actually turns out decently. It’s also amazing what a little bit of basic photo cropping and editing can do, too.

Highway 178 is narrow and twisty. Like much of California, the speed limit is 55, but you can’t even get going that fast much of the time, especially in a van and trailer like I’m driving. Fortunately, there are frequent pull-offs, as well as signs telling slow vehicles to actually use them and let faster traffic by. I have never received so many friendly toots of the horn or flasher blinks as I received on this drive after letting people pass. I have some issues with California, but this is one thing they get right most of the time. I certainly appreciate it when I’m on the motorcycle, trying to get around a slow-moving vehicle ahead of me, so turnabout is fair play.

Finally I descended into Bakersfield. I made my way to Hart Memorial Park, and parked by grass and trees for the first time since I left Los Angeles at the end of November. I’m not sure who was happier to be surrounded by them again, me or Lister. I decided to spend much of the day here, get some more work done, and simply enjoy the grass and trees. I couldn’t spend the night here, but I could certainly spend several hours during the day before finding a place to hole up for the night.

At lunchtime, I even hauled out the propane stove/grill from its new home under the bed (much easier access than before I moved my tools and such to the trailer) and cooked up some hot dogs. Even though I have my own portable table now, I figured I’d put the park’s picnic table to use, since that’s what it’s for.

After spending much of the afternoon in the park, I made my way to the Buttonwillow rest area a little bit up I-5. All of the apps I use recommended it as a good place to park overnight. Naturally, I was greeted by a great big “No Overnight Parking” sign as soon as a pulled in, because California. The lack of available overnight parking, and even laws against it in some places, is one of the main reasons why I wanted to drive north through Nevada instead, but that’s not happening.

I backtracked to Buttonwillow, where I’d just gotten gas (I can’t say “filled up” because the stupid California gas pumps keep shutting off before my tank is full). After mooching off “McDonald’s Free WiFi” for my online Skywarn certification class (I scored 100% on the test), I spent the night at a nearby T/A truck stop. I had no problems. There were even a couple of other camper vans parked there when I woke up in the Taco Bell and Popeye’s parking lot, rather than the big truck parking spaces. They need all the room they can get, and the van and trailer fit perfectly across two normal-sized spaces. It wasn’t the quietest or darkest night’s sleep, but it did the trick.