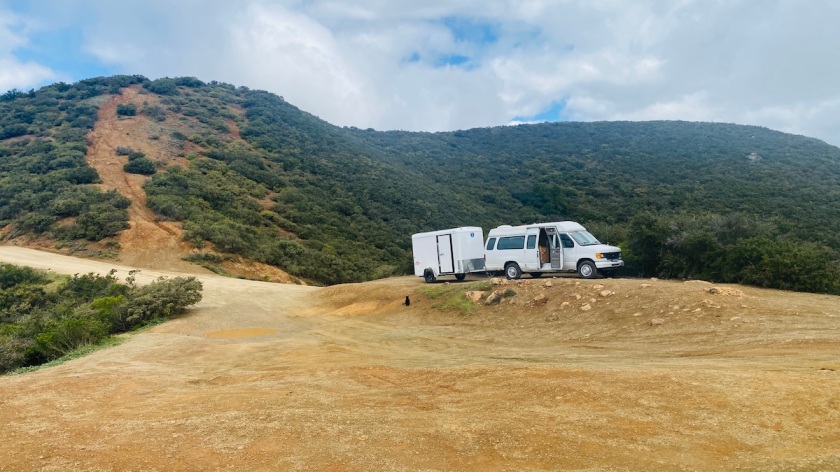 What a place to park for the night! But let’s start at the beginning.

After getting a coffee from the truck stop where I spent the night in Buttonwillow, I took myself to a nearby park. Here I let Lister roam around outside while I worked for a few hours. Once I’d done all I could do, it was time to continue my journey. My friend, California resident, and fellow motorcycle journalist Jonathan strongly recommended I take California Route 58 west from Buttonwillow toward the coast. This is yet another occasion where I trust the locals to tell me where to find the good stuff.

Jonathan was clear that although he enjoyed this as a motorcycle road, my van and trailer would have no problem tackling it. He was right. But over the mountain pass, I completely understood why he enjoyed this on his motorcycle. The hills, twists, and turns were fun, even in my van. They’d be that much more fun on a motorcycle.

Or a classic sports car. Soon after the road started to get twisty, a Jaguar E-Type passed me, soon followed by a BMW 2002. Not long after, an entire group of 2002s, E30s (including a very rare Alpina version), a 1970s Toyota Celica, and a 2000s Porsche 911 caught up to me. There was virtually no traffic at all on this road until this group showed up, so clearly they were out having fun together. They were patient as I wound through the hills, looking for somewhere to pull over and let them go play. There was no shoulder, but when we reached a long straightaway with a dotted yellow line, I pulled over and let them all by. In this video clip you can see how they thanked me with friendly waves, horn honks, and flasher flashes.

Later on, as it started to rain hard (this mountain pass literally had its own personal weather system), I caught up to a few of them stopped on the road. They were just getting underway again. I suspect one of them might have spun out around a sharp turn, but not hit anything, gathered their wits, and carried on. I put on my flashers, stopped, and waited patiently since I’d just have to let them pass me again if I passed them. They were on their way soon. Eventually, the road flattened out, and the group pulled into a field as I finally passed. Again, many of them waved as I went by.

I haven’t seen so many classic BMWs at the same time since autocrossing with the Boston Chapter BMW CCA more than 20 years ago. (That’s how I know what all of these cars were and what they were doing.) These cars were still fairly common back then, but not so much now, especially in New England where everything turns to rust. That’s not the case in California, and I enjoyed the impromptu mobile car show.

The desert-like oil fields gave way to hills and grassland, perfect for ranching, which is exactly what happens here. The road is less technical but still winds its way gently over and around the hills. With absolutely no traffic, I just kicked back and enjoyed the drive.

Eventually, 58 ended and dropped me on US 101. My destination was a parking lot I’d found on iOverlander off TV Tower Road. The description said it was big enough for six to eight rigs, which meant I’d have no problem fitting there. The listing had numerous reviews, including recent ones, confirming problem-free overnight stays. However, the road up there was much steeper and narrower than I’d expected. There was no way to turn around, so I was committed. The lot was the first place with enough space to pull in and turn around. I decided that since I was already there anyway, I might as well spend the night, and worry about the descent the next morning. While it would’ve been fun to unload the KLR and continue riding down this dirt road on a much more appropriate vehicle, I’d already used up all of my adventurousness for the day.

Once I got over my anxiety attack from the drive up (better living through chemistry), I could appreciate the stunning view. I haven’t camped anywhere this scenic since the Blue Ridge Parkway. I could see the Pacific Ocean from here, 20 miles away beyond Morro Bay. Over several hours, I watched clouds form from ocean moisture rising up the mountains and condensing. These clouds came my way, and eventually swept over me. Like my night at the highest point of the Blue Ridge Parkway, I was in a cloud.

The location entry on iOverlander said that locals would often drive up here to watch the sunset. This proved to be entirely accurate, especially on a Friday night. Unfortunately, the joke was on them. There was no sunset to see from up here. I missed out, too. I’m sure it would’ve been absolutely spectacular.

I did get a consolation prize, though. The process that created these clouds stopped when the sun was no longer up to power it. The clouds stopped moving east, and instead sank to a lower altitude in the valley, leaving me above them.

After dark there was nothing to see down below because of the clouds, so I retreated inside the van and caught up on TV and video watching. One advantage of my altitude was extremely strong and fast internet service on both hotspots. Since my Verizon data had just reset for a new month and I had plenty of data left on T-Mobile before it reset in a few days, I didn’t feel bad using a few gigabytes for frivolous entertainment.