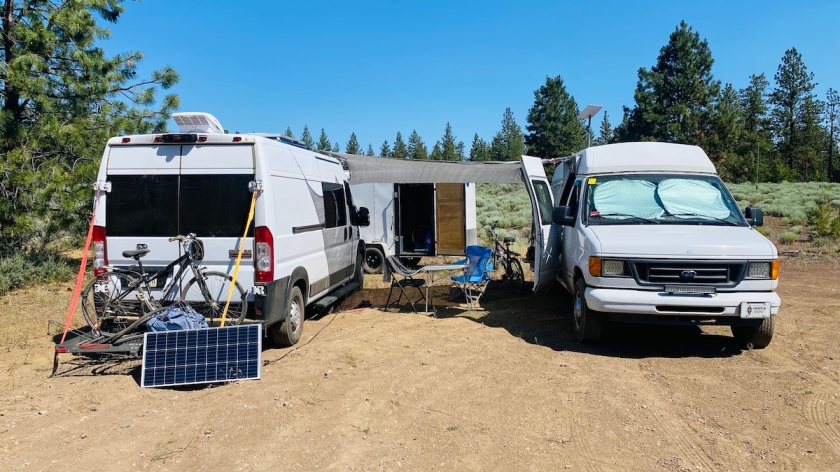 It’s been a while since Overland Expo, and what a week and a half it’s been. I realize I’ve been pretty quiet lately. Part of that is because so much happened at Overland Expo that it took me a while to put all that out there. Mostly, though, I’ve been pulling back from the internet a bit to get to know someone I’ve met in my travels.

Let’s call her Honey Badger. I once called her that as a joke, and it stuck because it describes her fun, snarky attitude well. She’s been a full-time nomad much longer than I have. We’ve been chatting online for the past month. It started with me asking her questions about Starlink, since she already had it. Her input was what pushed me over the edge to splurge for it myself. But then we kept talking. And talking. And talking. We got along wonderfully online. She was in the Los Angeles area when we started talking, but wanted to head north toward Oregon afterward, even before we met online. She was thinking of going up the Oregon coast, but decided to take a chance and make a detour inland to meet little old me in person.

We met for lunch around the corner from Overland Expo on the last day of the event. Our real-life conversations were just as enjoyable as they’d been online. So often someone presents themselves one way online but is a completely different person in real life. Not here. We hit it off extremely well — so well that we’ve been camping together ever since.

We’ve had some genuinely great times together. We get along wonderfully. We’re both pretty laid back, have a similar snarky sense of humor, and have amazing conversations. We have numerous common interests, yet we’re also different enough people to keep things interesting. She’s a teacher and musician who has dabbled in writing, while I’m a writer who’s dabbled in teaching and music. Honey Badger is vastly more experienced in the nomadic life than I am, yet she really likes what I’ve done with my setup, and how I’ve been making my way down the road. We’re both fiercely independent after people in our past letting us down. Both of us find it refreshing that the other can take care of themselves, and doesn’t need rescuing in one form or another.

It hasn’t been all sunshine, rainbows, and unicorn farts. The day after we met, Honey Badger led me to a place near Bend where she’s camped before. The place had been trashed since she was last there, and was unusable. There’s no way she could possibly have known this before leading me there down a terrible rough, dusty road (much worse than she remembered), but it was still quite stressful for me. At the time, I questioned whether she knew her stuff as well as she’d claimed to, since certain people in my past have not. We punted to a nearby Walmart parking lot to get our work done for the day, then returned to my previous campsite in Sisters, just to have a known-good place to spend the night.

We literally circled the wagons and set up my shade cloth between our vans. Despite that, the next day it still got too hot for Honey Badger, with no shade and needing to keep her van closed up while working. After finding shade nearby, she did some scouting near Bend the next day. She found an excellent place for us to stay in the National Forest just outside town, where it’s a bit cooler than in Sisters. Any doubt I had about her ability to find good campsites evaporated the moment I saw this place. There’s no northern exposure for Starlink, but our hotspots work just fine. I wanted to explore Bend anyway, not just for its 23 breweries, and we’ve enjoyed doing it together — including a few breweries.

The other issue I’ve been facing is all in my head — literally. Between my failed relationship last year, my failed marriage before that, and even a failed camping date in Joshua Tree this past spring (I left that part out of my post about the place), I seem to have put up more defenses and fortifications around my heart than Minas Tirith to prevent myself from getting hurt that way again. This is directly at odds with exploring possibilities with someone new, someone who has never hurt me in those ways, and someone who doesn’t deserve to compete with the ghosts of my past.

I’ve been honest since the beginning that I’m not ready for this yet. It’s a terrible cliche, but it’s true — “It’s not you, it’s me.” This has led to some conflicts, mostly in my own head, but they’ve had side effects in the real world as well. Our kayaking adventure wasn’t as enjoyable as I’d hoped because the crazy convoluted directions to get there added to my already high stress level from trying to process all this. I did better once I was actually on the water, and she did better after cranking some tunes to get her mind off it.

I’m fortunate that she’s as understanding and forgiving as she is. Being a teacher must have given her extensive patience, which she’s chosen to extend toward me. It worked. I needed time to work through my personal baggage, but as this week has gone on, I’ve been enjoying her company more and more. We’ve both stayed in Bend longer than we planned to because of it. I’d forgotten what this is like, particularly the positive aspects that my pain and grief from how the last one ended had made me forget about.

We still have our own adventures to follow for a while. I have plans in Colorado (now including Overland Expo), and she has plans to go north to Canada — ironically, to some places I’d hoped to visit during my canceled cross-country trip. I could go with her, but I’ve made commitments, and I’ve also been looking forward to visiting a part of the country I’ve never been to before. So tomorrow we’ll part ways, but only temporarily.

I also need time to work on the conflicts in my own head before I’m ready for… well, whatever this may become. But there’s potential. So far, I like this potential, even if my brain is working overtime to “protect” me from it. I’d hate to miss an opportunity like this because I’m not ready for it. Right now the notion is to meet up again after the next Overland Expo (how appropriate) in Colorado at the end of August. We’ll figure the rest out as we go.

For what it’s worth, Honey Badger has encouraged me to put all of this out into the world, rather than keeping it all to myself like I did with that failed Joshua Tree date that I never mentioned until now. I’m going a bit outside of my comfort zone by talking about my feelings (what can I say, I’m a man in modern society) rather than keeping this all to myself. I’m hoping this doesn’t sound like whining about feelings and such. But there it is, out in the open. May the odds be ever in our favor.