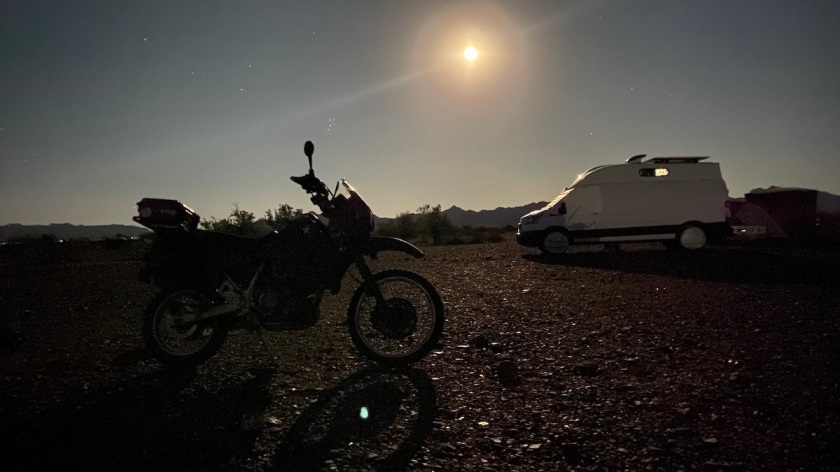 Last year, my time in Quartzsite overlapped with Amy for precisely one night. My first night here was her last before she continued her travels. But we’ve kept in touch, and she’s been very much looking forward to returning this winter. She’s been crossing the country from her home base in Michigan, reached Flagstaff yesterday, and planned to reach camp today.

I made a shopping run to Parker in the early afternoon. On my way back to camp, she messaged me that she’d broken down not far outside Parker. If the timing had been better I could’ve headed straight there to help her, but I didn’t see her message until I was back at camp in Quartzsite. The symptoms were the same as an electrical issue she had fixed in Arkansas. She’s not mechanically inclined, but she was able to tell me about the nature of that problem enough for me to pack a few tools and supplies on the bike, then ride back to Parker to see what I could do. It didn’t hurt that she’s driving a Ford E250 just like mine, so I know a thing or two about this particular vehicle.

I looked under her dashboard and quickly found the previous repair. The shop did a good job. It was in excellent shape, and likely not the cause of her current problem despite similar symptoms. I wiggled a loose negative battery terminal that I’d have to fix later. I’d brought my FIXD OBD2 scanner (full disclosure: that’s my day job), plugged it in, pulled the codes, and they were all related to her mass air flow sensor. I had intake cleaner back in my trailer from cleaning this sensor on my own van, but I hadn’t brought it with me.

It had been a rather hot afternoon, and she broke down while sitting in construction traffic, making any heat issues even worse. Even my van started misfiring briefly on my way back from Parker, a problem I’ll have to keep an eye on. It had taken a while for me to get there so the engine had cooled off. We tried to start it, and it ran. So we quickly packed up, adopted the Larry Enticer philosophy, and hit the road.

We were 50 miles from camp. We made it through Parker with me providing a fighter escort, watching Amy’s back, helping with lane changes, and giving her as smooth a ride as possible through traffic. We made it partway down the vast empty expanse of US 95 between Parker and Quartzsite before the van conked out again. The sun was going down and it was cooling off, so we let the engine do the same. A few minutes later it started again, but we only got two miles down the road before it shut down again. We gave it a bit longer to cool off. Plus, now that the sun was down, the desert was cooling off quickly. I was no longer hot in my riding gear when I wasn’t moving at highway speed. As it started getting dark, we tried the engine again, and it started. We were out of there.

Normally I don’t like riding at night, especially in the middle of the desert. But this was a special situation, and I wasn’t alone. Plus, the giant van in front of me would absorb any animal impacts before they got to me. Hey, I have to be realistic.

Amy’s van kept running in the cooler nighttime temperatures. I counted down each mile as we got closer to camp. Before long we could see the lights of Quartzsite in the distance, and then not so distant, before the speed limit dropped and we rolled into town. We willed the first traffic light to turn green for us, but ran out of luck at the second one. Fortunately the van kept running, and we continued on down the dark desert highway, cool wind in my… helmet?

We made it the three miles past town and turned into the La Posa South LTVA. Amy waved me to pass her and lead the way, reasonable because the place looks completely different at night from what she remembers. I brought us all the way back to camp. We made it! She got parked and situated, and then we sat outside for some well deserved beer. Yellow Wolf joined us, with a beer of her own. She also earned it, keeping an eye on Lister for me while I was gone.

That’s not at all how I expected my night to go, but I’m glad I was able to help. I didn’t actually fix anything, but at least I could provide technical and moral support, as well as a motorcycle escort. Amy’s here, she’s safe, and now we have time to figure out how to get her van fixed. Out here, it’s all about helping each other out.

Moved back to my old spot today. Lots of last year’s crew just arrived there this week, and we’re getting the band back together! 😎😎